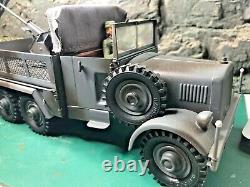 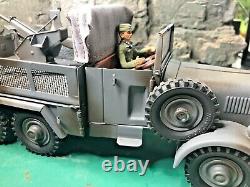 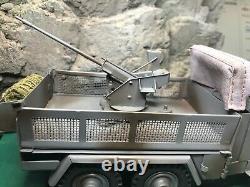 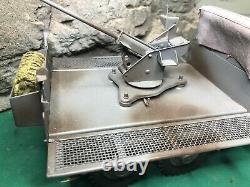 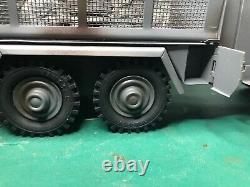 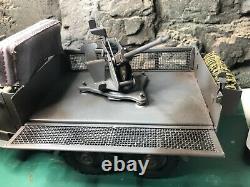 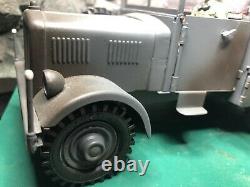 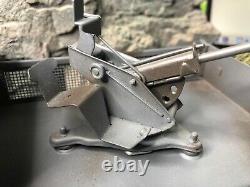 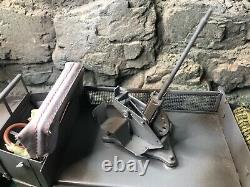 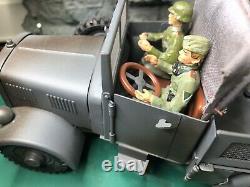 Well made tin plate with construction using the tab and slot method as toys of the 1930's / 40's were made. Made to compliment the military toys produced before the. WW2 by companies such as Tippco, Elastolin and Lineol. This model was made in early on in the production of MTM models.

Registration number WH30304 telling me this was the 4th model made by United Kingdom company MTM. Models took around 11 months from the first drawings to the model being made in a very limited number. Hand made model in 1/24 or 70mm scale accurately made down to the opening side locker, opening cab doors and the folding window screen.

Used in the Poland conflict and in most other areas as it could move men and tow various trailers with equipment about, but this version was fitted with a 2cm Flak gun which is removable from the vehicle bed via clip. The gun allows a normal Lineol or Elastolin figure to be seated on the gun firing seat. The barrel moves up and down. The side walls of the truck are made of a grid material and drop down to allow room for the gun crew to move about.

The gun cover which is 6" x 8" is stored in the rear locker at the back on the trucks rear tailboard. The roof behind the drivers head fits to the windscreen via the clips on the top edge of the screen. It is shown in the stored position.

The front wheels can be angled for display purposes. Painted colour was as used for the Poland campaign in WW2 it is grey with a light over spray of black in places. Having to sell various of my models as I have to make room for others on the way. All my display cabinets are now full, and I was hoping not to have to sell any of them. I do not like to put models away in boxes so perhaps someone else will enjoy them as much as I do, real toys made as they were when I was a child by a master model maker that produces the models for the enjoyment using his home workshop to scale and as per the real thing.

The seats have holes drilled so if figures have the metal pin at the base of the figure it can be accommodated. Figures without the spike in the rear can be used of course. I have been asked several times if this is clock work. No this item is not clockwork. 1/24 is equal to 70 mm used in Europe.

Most of the vehicles can be slightly larger or slightly smaller but they are mainly 1/24 which is the size Lineol and Elastolin made there various products to be made to that size. I will try and post on the day it is paid for dependent on the time of the day as I need to pack it. You will be kept up dated. This item is in the category "Toys & Games\Vintage & Classic Toys\Other Vintage & Classic Toys". The seller is "slobadobabob" and is located in this country: GB.