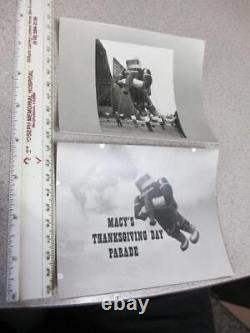 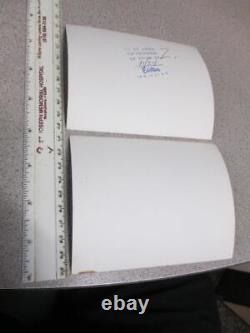 NBC TV photo 1950s (2) bumper card MACY'S TG parade balloon toy robot space gun. ITEM FOR SALE IN THIS LISTING : 2 photos from a TV network, original to the era listed in the title ; this item was referred to in the industry as a bumper or "bump" card. They would show this image while making an announcement about the upcoming show.

These are significantly rarer than normal TV press photos since bumpers were only used by TV stations. Great images of a detailed parade balloon of a giant robot! Very similar to toy robots of the era. SIZE - (see white board for inch markings).... CONDITION -- Fine to excellent unless noted otherwise........

Will have markings on the reverse consistent with newspaper and TV studio use (rubber stamp, handwriting, codes etc). I can do this but ONLY If you follow the below instructions. MY PHOTOS - If more than 1 item is shown in a photo--- then items are in SEPARATE listings unless otherwise stated!

West Coast may be significantly higher on larger or heavier items. FYI here is what the US Post Office currently charges. Offered by DAVID WELCH ------ author of COLLECTING PEZ 1995 and Pictorial Guide to Plastic Candy Dispensers 1991. I have been a full time antique and collectibles dealer since 1989 and have been collecting since the early 1970s. If you have questions about any negatives I have received, feel free to ask.