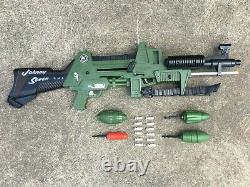 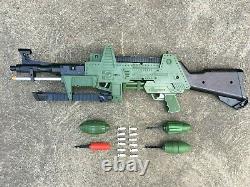 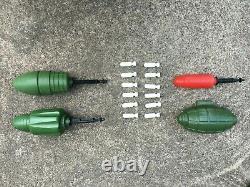 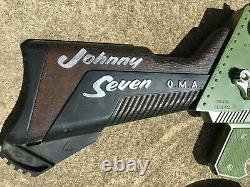 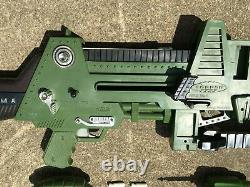 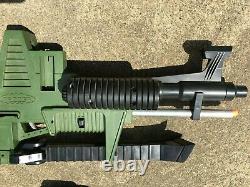 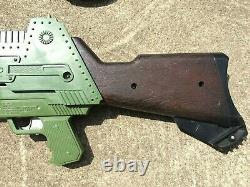 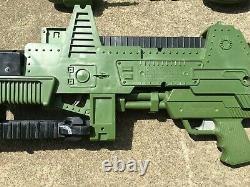 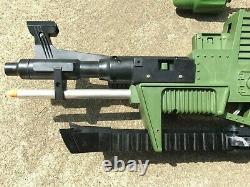 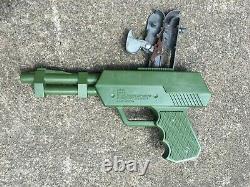 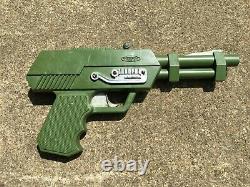 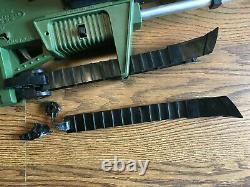 This is an all-original, vintage 1964 Topper Toys Johnny Seven One Man Army OM. The multifunctional gun can fire plastic bullets, launch a grenade, fire various types of large shells and rockets, imitate a machine gun and release a detachable pistol. It measures approximately 37 long by 4 wide and comes with bipod legs for display. One of the legs is broken and needs to be re-glued.

This toy rifle is in played-with, excellent condition with normal wear and scuffing. The rifle has a full gun barrel tip.

One of the black plastic bipod legs is cracked in three pieces. It looks like they were glued in the past, but the glue job did not hold up under the weight of the gun.

There is a smooth action on the cocking mechanism. It comes with all of the original bullets and various shells that load and fire as designed.

The toy has been tested and does shoot all of the different types of ammunition. All parts are original; there are no reproductions.

1 red armor piercing shell. Molded into the gun is. The detachable cap pistol is made of hard plastic and is army green in color. It measures approximately 10 ¼ long by 1 ½ wide.

Since it was a played-with toy, it has some minor scuffs and the rear sight of the pistol is missing (see photos). The metal trigger mechanism, roll cap feeding mechanism and hammer on this cap gun work well, exactly as designed. It accepts roll caps, which are not included. This Johnny Seven OMA gun is an original, vintage, hard-to-find item in this condition from the Topper Toy Company. Per E-Bay policy: This replica gun contains the colored markings required by law, including a permanently attached orange plug.

See the photos to judge the condition for yourself. Message me if you need additional information or photos.

This is an original vintage item not a reproduction or a re-issue. This item comes from a smoke-free and pet-free home. See my other listings for more vintage toys.

The gun is large and must be sent in an oversized box. The box size drives the postal cost more than the weight does. The toy gun will be surrounded by bubble wrap.

The item "Vintage 1964 Johnny Seven One Man Army Gun, Pistol, Ammo, Bombs by Topper Toys" is in sale since Wednesday, September 8, 2021. This item is in the category "Toys & Hobbies\Vintage & Antique Toys\Other Vintage & Antique Toys". The seller is "ddbc37" and is located in Brecksville, Ohio. This item can be shipped to United States.