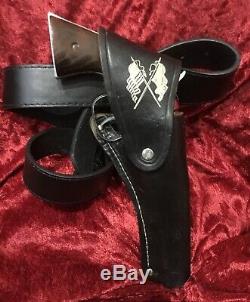 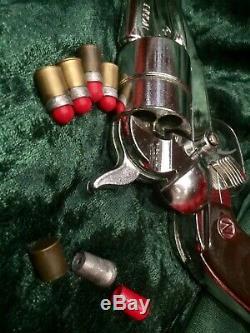 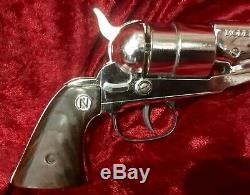 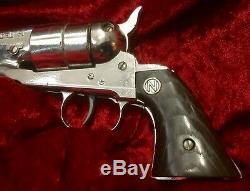 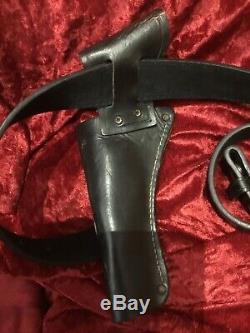 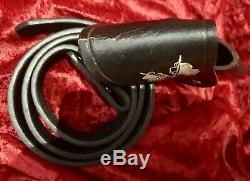 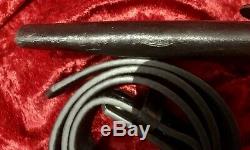 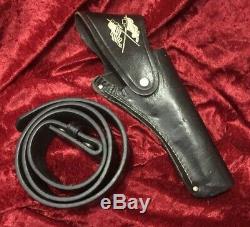 The Stallion, Model 61, cap gun, was made in 1961 to commemorate the 100. Anniversary of the War Between the States by Nichols Industries, Inc.

It is a replica of the sidearm most used by the North and the South the Colt 1860 Single Action Army Revolver. This "61" is a double-action six-shooter cap gun. The die cast and chromed Cap. Gun is approximately 11" long and 4 ½" high. The simulated walnut, brown plastic grips are in excellent condition no cracks, scratches, or chips.

Chromed Nichols Ranch Circle Ns adorn the grips on either side. This 61 has a bright, shiny chrome finish. The Chrome version is most rare there seem to have been fewer of these produced than the Blued model.

This chrome specimen is exquisite. Loading gate opens to load bullets and closes securely. Crisp hammer snap and rotation of the cylinder with each pull of the trigger. This 61 appears to never have fired caps. This Cap Gun is one of the most valuable Nichols ever made very hard to find. Few were made, and few were saved. Just finding the 3-piece bullets is difficult and pricey.

These rare bullets, by themselves, are collector's items. Five 3-part bullets come with this cap pistol. The cartridges fire cap-activated red rubber bullets.

The caps blast travels through a tiny, pin-sized tunnel in the zinc sleeve to propel the toy bullet. "NICHOLS MODEL 61" is embossed on the left side of the barrel and USE ONLY STALLION CAPS & SHELL FIRING CARTRIDGES AND PELLETS under the barrel on the faux, cylinder ejector rod. Embossed on the right side of the barrel is MODEL 61 and JACKSONVILLE TEXAS USA on the ejector rod. Cap Pistol comes with an even more scarce, original Dragoon Holster. It is shiny black leather and the over flap has silver painted, crossed Union & Confederate flags.

Holster is approximately 10" high and 4" wide in fair condition. The leather over flap and front edge of holster are beginning to crack from age. The original removable black leather holster belt is 36 inches long and 1.5 inches wide and is in excellent condition. The belt has no buckle and does have snaps for the buckle to be attached.

The Stallion Model 61 Revolver. Manufactured in 1961 by Nichols Industries, Inc. Jacksonville, Texas to commemorate the War Between the States 100. A replica of the Colt 1860 Single Action Army Revolver, used by both the North and the South, the "61" is a cap-activated soft pellet firing, double action 6-shooter.

One of the rarest, most sought after and most valuable Nichols cap guns, it loads six 3-piece cartridges. Each consisting of a zinc bullet sleeve, holding a hollow, plastic, red bullet encased in a brass shell made by Remington. Pull the trigger and the cylinder rotates to fire a bullet activated by a round paper cap, placed between the sleeve and the shell casing. These innovative 3-piece bullets are extremely scarce and valuable today.

This rare, chrome Model 61 (most were blued) includes an even scarcer black, leather, dragoon holster with silver-painted Union and Confederate crossed flags on the military cover flap. The brown, walnut-like, plastic grips are adorned by chromed Nichols Ranch Circle Ns. This replica gun contains the colored markings required by law, including a permanently attached orange plug.

PLEASE STUDY PHOTOS CAREFULLY AND DECIDE THE CONDITION AND COMPLETENESS YOURSELF. Buyers are covered by the. The item "Vintage Cap Gun Nichols Stallion Model 1861 + Five 3-piece bullets Used, Rare" is in sale since Tuesday, February 11, 2020.

This item is in the category "Toys & Hobbies\Vintage & Antique Toys\Cap Guns\Diecast". The seller is "jedniederer" and is located in Kingwood, Texas. This item can be shipped to United States.